When Shirley found home with Aeon, she had already been displaced twice. Her previous landlords had sold their properties to new owners. Those new owners’ different rental criteria meant Shirley needed to find a new place to live. She used to own a townhouse in Northeast Minneapolis, but it had become too much work for her in retirement. So, she needed the reduced responsibility of a rental unit.

She moved into an apartment in Robbinsdale and lived there for five years. At that point, the landlord sold the property to a new owner. Although she had only 60 days to find a new home, she did so. She found another building for retired seniors. But once again, after living there for only a few years, the landlord sold the property. This time when Shirley searched, she found home with Aeon at an apartment complex in Columbia Heights.

This cycle of finding housing, being forced to move and searching for new housing is unfortunately common. It is also well known to local government and nonprofit organizations like Aeon. Countless people like Shirley have been affected by ownership changes of multi-family housing. This trend happens in the Twin Cities and across the country.

But for Shirley, the continued displacement resonates on a deeper level, too. Until her late twenties, she had not known that she was part Native American. She learned this when her older sister began researching their family history.

Their mother had died of a heart condition at the age of forty, when Shirley had barely graduated high school. When Shirley’s sister began researching, they discovered their mother had been a member of the Creek nation.

She was born to Native American parents and was one of seven children. Their mother and her siblings had been separated and placed with foster families. These foster parents were wealthy owners of a cotton plantation in Oklahoma. They chose to hide the identity of their foster daughter. They did so by giving her makeup and clothing to make her appear more ‘white.’

When Shirley and her sister were born, their Native American identities were also hidden. Their grandparents encouraged them to act ‘properly.’ As part of that, the girls were not allowed to talk with the workers who picked cotton on the plantation. It was only in secret that Shirley’s mother would bring the girls to pow-wows. These events exposed Shirley to aspects of her own culture. Although she and her sister did not put the pieces together at the time, these gatherings played a large role in Shirley’s sense of identity. “I always felt at home there,” she explains.

Shirley was a bit of a rule-breaker – “I had a rebellious edge. I never really fit in,” she says. She recalls wanting to share fruit from their trees with people outside the plantation fence. Her grandmother felt that the fruit would be better off rotten than shared for free. Shirley remembers a specific time when she helped a young boy pick cotton for the day when his parents were sick. That way, his family would still meet their quota and be able to buy food for the day.

Shirley’s father was a lieutenant colonel in the armed forces, and her mother was an army nurse. They had met on base in Oklahoma. He retired when Shirley was twelve or thirteen. Then they moved to Minnesota, where his parents lived. “My grandparents were English,” she describes with a practiced British accent, “and they were very proper.” Her family lived in Minnesota until Shirley’s mother passed, almost sixty years ago.

Eventually, Shirley married and had a child before her husband passed only a few years into their marriage. These were some of the hardest times in her life – as a single mother, she needed to provide for her son. But her late husband’s family and others in the community failed to provide aid in her time of need. They commented on her perceived failures without providing support.

It was during this time, in a church service, that Shirley met the love of her life. She has been married to him now for almost fifty years. It was less than three months from the time they met until the time they married. Even so, the relationship has been the most fruitful and honest one of her life. “When you know, you know,” she says.

Over the past five decades, Shirley has dedicated herself to raising two beautiful boys, serving her community and reclaiming her relationship with her Native American ancestry. She sages her apartment each day and she does artwork inspired by the Missing and Murdered Indigenous Women and Children. Shirley writes about her art:

“My upbringing in Oklahoma has been the biggest influence and inspiration for my art creations. Also, my volunteering and working with the Battered Women’s movement for the past 45 years.

My Shawnee/Creek Mother was my teacher. She taught me to embark on learning to create with leather, beads, and feathers. To also listen to my inner soul, as it speaks to me and by listening it will help me to create my art.

The RED hand symbolizes the Voices of these Women being silenced. RED is the only color Spirits see. It is hoped that by wearing RED we can call back the missing Spirits of our Women and Children so we can lay them to rest.

The Medicine Wheel is a metaphor for a variety of Spiritual concepts. I use it here to represent many Nations of people and those Missing Women and Children.

North = White, East = Yellow, South = Red, West = Black. Many nations may have other colors to represent their medicine wheel. These are the colors I have been taught.” 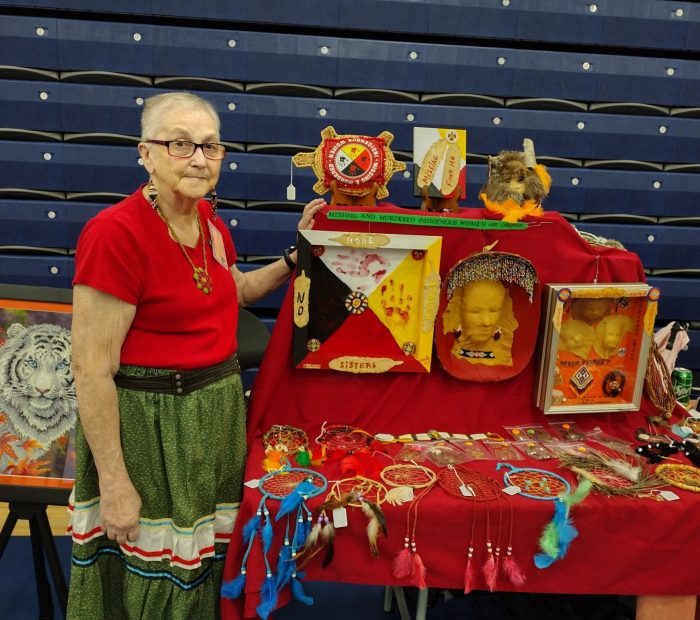 Shirley has had three names in her life. She had been Shirley Sheffield, Shirley Brown, and now, Shirley Benitez. For a life marked by change, there is beauty in how that change is reflected in something as foundational as a name. Today, Shirley has claimed her identity. She has also found deep meaning in the traditions and connections of her ancestors. She has a close relationship with another woman in the building who also comes from the Creek nation. “I felt connected to her from the start,” she describes. “And our ancestors probably knew each other.”

After so many displacements, finding home with Aeon has provided Shirley a landing space in her retirement. She is invested in the community at the building and would like to see it continue to grow and thrive. “I want to know that everyone is remembered,” she says. This November, we encourage you to join in the spirit of Shirley’s hope for community. We encourage you to join in remembering and centering those whose land was stolen by white settler colonists. And we ask you to join us as a partner in preserving the homes of our Native community members.